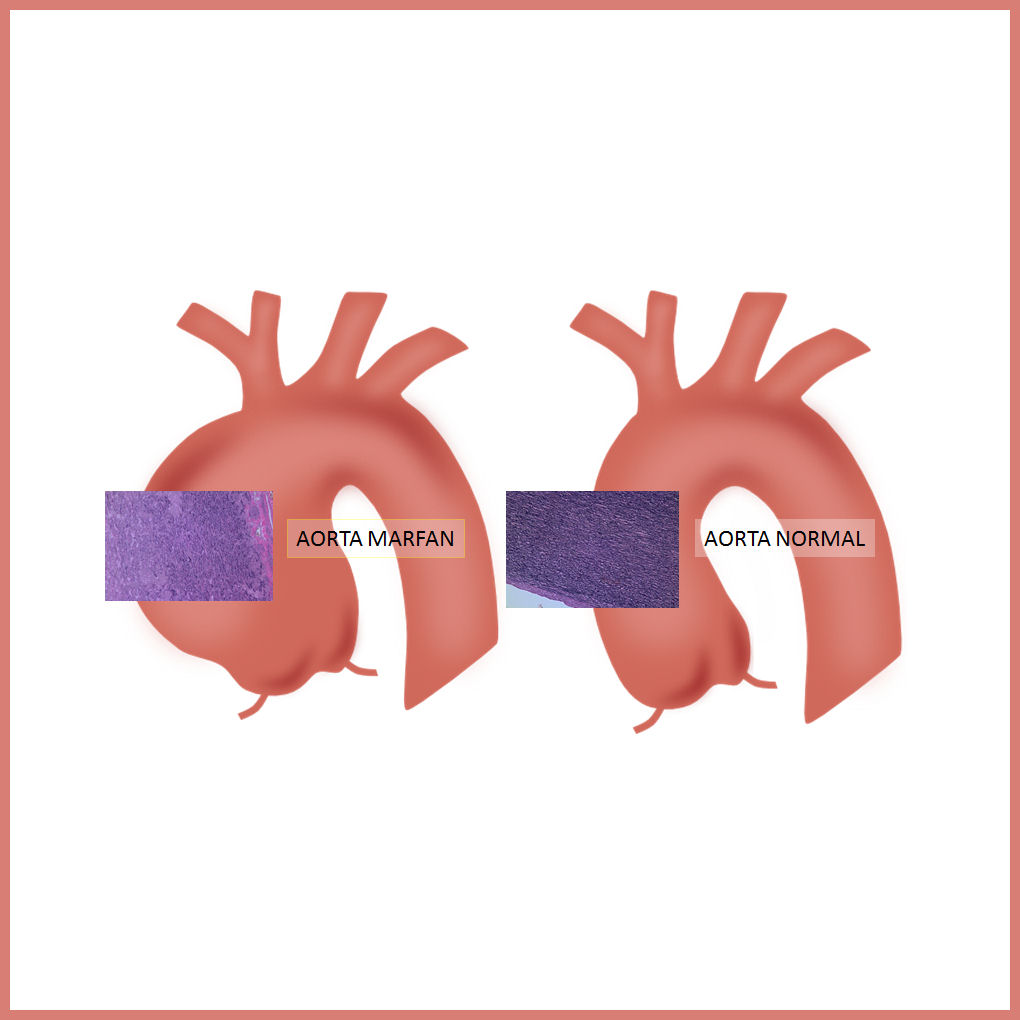 A research team led by the University of Barcelona (UB) has determined the basic mechanisms causing aortic stiffness that usually precedes the formation of ascending aortic aneurysms in patients with Marfan syndrome. Aortic aneurysms, thoracic and abdominal, are the nineteenth cause of death in the world. Marfan syndrome is a paradigmatic inherited rare disease to study this type of pathologies. First results of the study —published in the journal

Arteriosclerosis, Thrombosis, and Vascular Biology— show that aortic rigidity results from, on the one hand, altered assembly of extracellular matrix microfibrils and phenotypic changes in smooth muscle cells; and on the other hand, alterations in the regulation of the transforming growth factor beta (TGF-β). Research work proves that alterations in cells and extracellular matrix cause aortic stiffness which indicates aneurysm beginning. According to

Gustavo Egea, leader of the study and professor in the Department of Cell Biology, Immunology and Neurosciences of the UB, “the phenomenon may also take place in other type of aortic aneurysm without a genetic origin. Therefore, this could be a general mechanism but in the case of Marfan syndrome it happens in a more accelerated way”. Doctor Egea is also member of the

Institute of Nanoscience and Nanotechnology

(IN2UB) and the August Pi i Sunyer Biomedical Research Institute (IDIBAPS). The study has been developed together with Isabel Fabregat, lecturer in the Department of Physiological Sciences II of the UB and researcher at the Bellvitge Biomedical Research Institute (IDIBELL-UB). Samples from patients with Marfan syndrome who underwent an aorta repair operation were used in the study. Samples were collected from the affected area as well as from more distant regions, and compared to those taken from other heart donors. Thanks to cellular, molecular and biophysical analyses, the basic mechanisms altered in the disease have been studied in tissues and cell cultures.

Marfan syndrome is caused by mutations in the gene encoding fibrillin-1, which provokes elastic fibers malformation and assembly. Elastic fibers, together with smooth muscle cells, are the most important components of the thoracic aortic wall. The study proves that smooth muscle cells located in the middle of these fibers have a more contractile phenotype, accompanied by and greater cellular stiffness. Moreover, a higher expression of collagen takes place in the extracellular matrix to compensate the extensive breakage of elastic fibers. That increases aortic walls rigidity and generates a fibrotic response which may lead to an aortic rupture. A key factor in these two processes is the cytokine TGF-beta. Under normal circumstances and thanks to fibrillin-1, the matrix regulates TFG-beta availability. In patients with Marfan syndrome who present fibrillin mutations, the matrix does no longer have the ability to store TGF-beta. “The excess of TGF-beta is one of the causes of cell increasing contractility. Therefore, considering treatment, if we control the availability of TGF-beta or cell phenotypic alterations, aortic progressive rigidity will be stopped or slowed”, affirms Gustavo Egea.

Marfan syndrome is caused by mutations in the gene that tells the body how to make fibrillin-1, one of the two main components of the elastic fibers that compose the connective tissue. Mutations results in altered assembly of elastic fibers in tissues; they lose their ability to strain and relax and tissues are damaged in an accelerated way. Every tissue presenting many elastic fibers is affected by the disease. For example, in the skin, patients develop stretch marks; in the eyes, patients experience dislocation of one or both lenses. One of its most severe symptoms affects the cardiovascular system: ascendant aorta is weakened which leads to aortic aneurysm and aortic dissection. These clinical symptoms are characteristic of Marfan syndrome a rare disease which is difficult to diagnose and affects one out of 5,000 people. Patients with Marfan syndrome are usually tall and thin with disproportionately long arms, legs, fingers and toe. The life expectancy of a person with Marfan syndrome is 40 years; it is estimated that around 50% of people with the disease are not diagnosed. In Catalonia, there are around 5,000 patients with Marfan syndrome. Diagnose is made by studying clinical manifestations considered characteristic of the syndrome. If there is any doubt a genetic analysis can also be done. This is a completely multidisciplinary investigation. Besides UB and IDIBELL researchers, the Marfan Unit in Madrid, a group of surgeons at the Hospital Clínic in Barcelona, the Hospital Doce de Octubre in Madrid, and the Hospital de Bellvitge as well as a team of pathologists have also collaborated in the study. Moreover, researchers at the Institute for Bioengineering of Catalonia, led by Daniel Navajas, have also made important contributions to the development of the study. Hal C. Dietz, who discovered that fibrillin-1 mutation causes the disease in 1991, is one of the authors of the article.