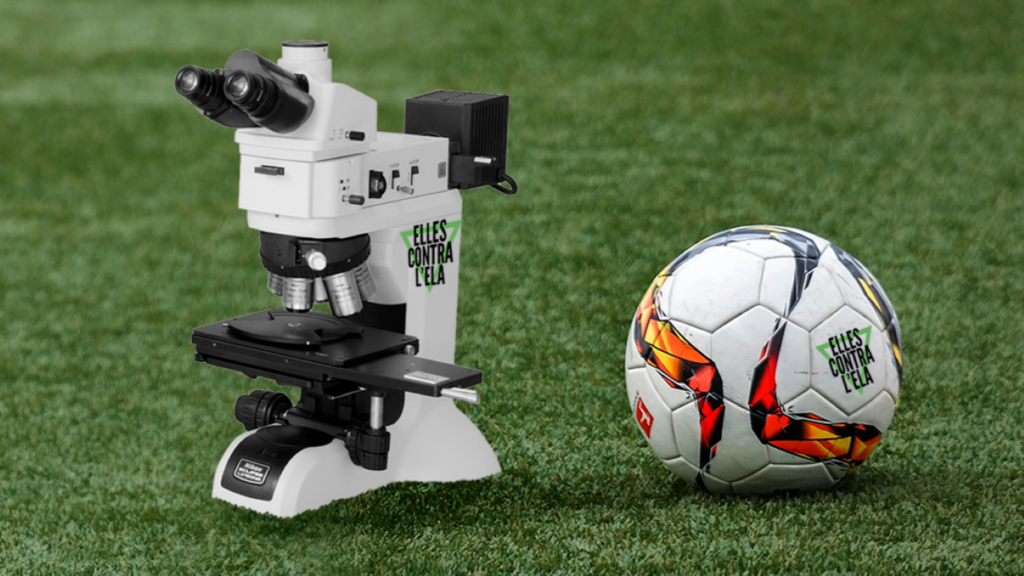 The “Elles contra ELA” solidarity campaign begins today with the aim of raising awareness about ALS and raising funds for research. This project is promoted by the research group on neurological and neurogenetic diseases of the Bellvitge Biomedical Research Institute (IDIBELL), with the support of the Catalan Foundation of ALS Miquel Valls, the sponsorship of Vueling and Macbor and the collaboration of Carlota Planas Riera, founder of the representation agency “Unik Sports Management”.

Until the 21st of June, different initiatives will be carried out within the framework of the campaign to promote donations through the bizum code 02621. Also, on the 11th and 12th of June, the 1st “Elles contra ELA” Tournament of women’s 7-a-side football will take place, which links sport and science and will devote all its profits to research. This event will be attended by Patri Guijarro, a FC Barcelona player.

Amyotrophic lateral sclerosis (ALS) is a neurodegenerative disease that affects the motor neurons of the brain, brainstem, and spinal cord – cells that transmit the order of voluntary movement from the brain to the muscles. This causes the brain to lose the ability to control muscles movement. As a result, people with the disease have advanced muscular atrophy, causing progressive paralysis and in some cases affecting speech, swallowing, and breathing.

The origin or cause of ALS is currently unknown, but it is associated with certain risk factors, such as the presence of genetic mutations or aging. In addition to these factors, as explained by Dr. Pol Andrés Benito, researcher at IDIBELL, has also been shown to have a close relationship with the practice of high-intensity sports: “One of the few things we know about ELA is its link with the practice of high-intensity sports. That is why, historically, we find many male sports figures who have suffered or are suffering from this disease. However, with the rise of professional women’s sports, this fact may begin to change, a factor that has had a significant contribution in the birth of “Elles contra l’ELA.” The acquisition of new lifestyles and roles by women with the advancement of society can lead to new factors, both risky and protective, affecting the incidence of the disease. ”

The highlight of the campaign will be the 1st Women’s 7-a-side Football Tournament “Elles contra l’ELA” which will take place on 11 and 12 June at the Mar Bella sports complex – Agapito Fernández facilities. On these two days, 16 amateur football teams will play to raise funds for ELA research. Registration is now open on the campaign website www.ellescontraela.org.

In addition to football, the tournament will also host other sports activities for all audiences such as yoga and physical activity classes as well as informative talks on the disease and its multidisciplinary approach for patients and families. The full agenda can be found here. The event will be attended by FC Barcelona player Patri Guijarro, who will also present the awards on Sunday 12 June.

“We are very happy to be involved in this initiative and join forces to invest more in research, which is essential in a rare disease as unknown as ALS. In addition, ”Elles contra l’ELA”is part of a very important month for us: the annual month dedicated to raising awareness about this disease” concludes Esther Sellés, Director of the Catalan Foundation of ELA Miquel Valls.

The official collection of the campaign will be made public on June 21, 2022 – World Day Against ALS – and all funding received will go to research projects of the IDIBELL neurological and neurogenetic diseases research group. The team involved in “Elles contra l’ELA” is made up of volunteers, so in no case will the money raised go to allowances, salaries or expenses not related to the research.

Do you want to participate? Make a donation via Bizum Code 02621.

“Elles contra l’ELA” (They Against ALS) is an awareness and fundraising campaign for amyotrophic lateral sclerosis (ALS). The campaign is being promoted by the research group on neurological and neurogenetic diseases of the Bellvitge Biomedical Research Institute (IDIBELL), with the support of a group of volunteers and the Catalan Foundation for ALS – Miquel Valls. Donations will be made through the Bizum code 02621, and the I Tournament “Elles contra l’ELA” will be held on June 11 and 12 at the Mar Bella sports complex – Agapito Fernández Facility.