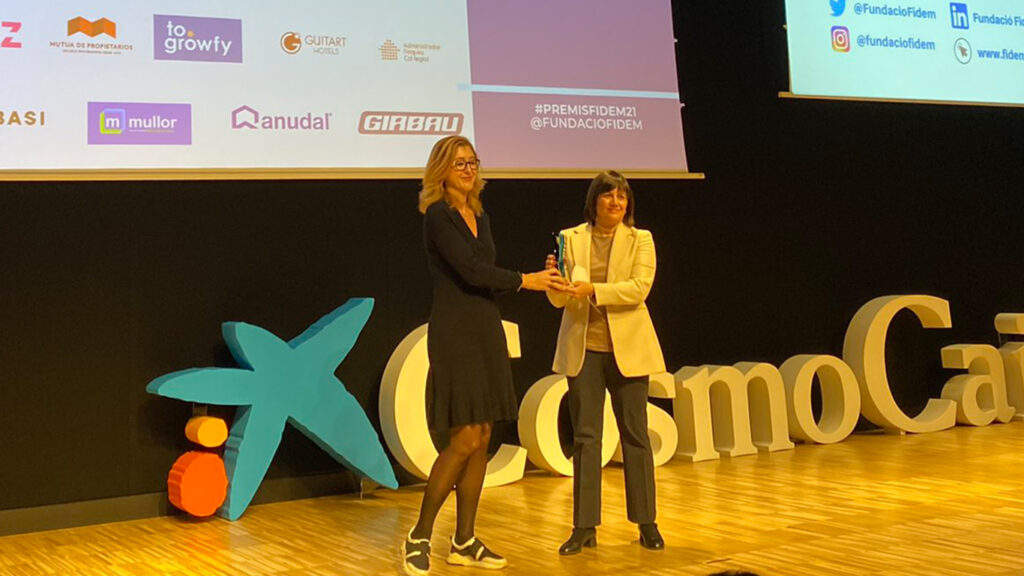 The doctor in biochemistry and specialist in neurodegenerative diseases, Marta Barrachina has received the Innovation award granted by Fidem, the International Foundation for Entrepreneurial Women. The awards ceremony took place this Thursday in Cosmocaixa in an act with speeches by Joana Amat, president of the Foundation, and Laura Borràs, president of the Parliament.

Barrachina, a principal investigator of the Neuropathology group at IDIBELL and co-founder of ADmit Therapeutics, has developed Alzheimer’s early detection tests that are expected to be released in 2023 and, would have a significant impact on the lives of thousands of people. Last year, the spin-off received 3.3 million euros from the European Commission, enough to bring its early diagnosis test for Alzheimer’s to the market.

Fidem was created in 1996 to support and finance women entrepreneurs, who despite their initiative and effort are limited to achieving their objectives. Through networking, training, mentoring as well as entrepreneurship programs, Fidem wants to promote and give visibility to female business activity as an agent of economic and social development. For 24 years, it has been the annual Fidem awards ceremony a way to recognize and visualize the work carried out by businesswomen and publicly demonstrate their achievements.

In its XXIV edition, the 2021 Fidem Awards have recognized the work of eight ReDoneS. Apart from Barrachina, Meritxell Bautista won the Co-Responsibility Award for the creation of Fibracat TV, the first openly feminist DTT channel and the Technology Award went to Maria Blasco, promoter of new companies that are born groundbreaking research, such as telomere measurement and the fight against cancer. Guayente Sanmartín, general director of Large Format Printing at HP, received the award for Professional Career, and Isabel Reig López (Reig Jofre Laboratories), was the winner of the Family Business Award. Nausica Trias, industrial engineer and director of AIS Group; Imma Pericas, president of the NouXamfrà Foundation; and the co-founders of UMA Intimates, Carla Términi and Marie Gutiérrez.