ADmit Therapeutics receives 3.3 million euros from the European Commission to bring its early diagnosis test for Alzheimer’s to the market 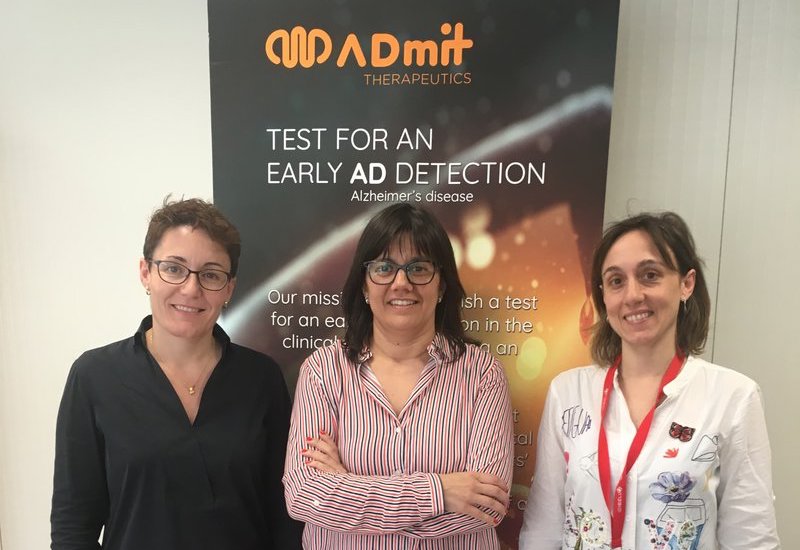 ADmit Therapeutics, a biotechnology company that emerged from the Bellvitge Biomedical Research Institute (IDIBELL) at the end of 2017, has been selected by the European Commission in the EIC Accelerator call for the Horizon 2020 programme to receive 3.3 million euros. The spin-off, one of the 36 awardees out of 1,406 applications from companies of all disciplines, will invest the funds in accelerating the development plan of its early diagnosis test for Alzheimer’s with the aim of obtaining approval and reaching the market in 2023.

This programme, formerly known as SME Instrument Phase 2, supports high-potential innovative companies to help them develop and bring new products, services and business models to market that can drive economic growth. “This is a very competitive call with only a 2.5% success rate and getting it in the first attempt is an achievement,” says Marta Barrachina, CEO and co-founder of ADmit Therapeutics and principal investigator of the Neuropathology group of IDIBELL. And she continues: “In the last quarter we have closed an American investment, a crowdfunding round and we have received the EIC Accelerator. It is a recognition for the company and for the research that started at IDIBELL”.

“ADmit Therapeutics is a clear case of success since in 2020 it will have received 3.8 millions of euros of highly competitive funding from both Europe and the United States“, says Raquel Egea, Director of the IDIBELL Business Development and Innovation Area. The grants endorse the company’s development plan, intended to have the CE marking by 2023, a regulatory process necessary for the commercialization of any medical device.

According to Barrachina: “This investment shows the potential of the technology we are developing and recognizes the ability of our team to achieve it.” Barrachina has a PhD in Biochemistry from the University of Barcelona (UB) and an MBA from the Ramon Llull University. Inventor of six patents, she has been a principal investigator at IDIBELL since 2006. The other co-founders are the doctors from the Bellvitge University Hospital Ramón Reñé, head of the Functional Dementia Unit of the Neurology Service, and the neurologist Jordi Gascón, deputy director of the Outpatient Process, who are also members of the Medical Advisory Council of the Catalan start-up.

An essential screening tool for finding treatments for Alzheimer’s

Today, unfortunately, there is no treatment capable of curing or preventing neurodegenerative dementias such as Alzheimer’s and only symptomatic medications are available. To a large extent, this fact is due to the fact that patients participating in clinical trials are already in late stages of the disease, when there is already neuronal death and therefore the drugs studied do not have the possibility of demonstrating their efficacy.

The diagnostic test being developed by ADmit Therapeutics, consisting on an epigenetic analysis of mitochondrial DNA in blood samples, is based on the hypothesis that mitochondria stop working properly just before the appearance of the classic brain aggregates of β-amyloid and tau proteins. “This window of medical opportunity may allow Alzheimer’s patients to be diagnosed earlier and thus help to develop new therapies or, when these are already approved, begin the treatment earlier”, Barrachina explains and concludes: “In the case of Alzheimer’s this is especially important because it is a disease that is difficult to reverse”.

Currently, the company is working with a predictive algorithm through the analysis of more than 300 blood samples from patients and intends to begin the clinical validation of the test next year.

This financing is in addition to the nearly 800,000 euros received this year by a key US organization in the sector and a round of equity crowdfunding in the investment platform specialized in biomedicine Capital Cell, which was led by Equity4Good, the investment vehicle of Ship2B, and also featured the participation of GENESIS Discovery, the GENESIS Biomed fund, and WA4STEAM. In addition, ADmit Therapeutics had already received an investment from BStartup10 and several grants from the Spanish government and the European Institute of Innovation and Technology (EIT Health).

The company, which has also submitted other European projects that are pending resolution, will continue to participate in investment forums to explain its experience and does not rule out new investment rounds, although not in the short term.

Share on Facebook
Share on Twitter
Share on Linkedin
Share on Email
Tweets by @idibell_cat
Tags: Innovation, Neuropathology, Neuroscience Area, Neuroscience Program,
Manage Cookie Consent
To provide the best experiences, we use technologies like cookies to store and/or access device information. Consenting to these technologies will allow us to process data such as browsing behavior or unique IDs on this site. Not consenting or withdrawing consent, may adversely affect certain features and functions.
Manage options Manage services Manage vendors Read more about these purposes
View preferences
{title} {title} {title}
Scroll to Top