Identified a new therapeutic target for the treatment of Alzheimer’s 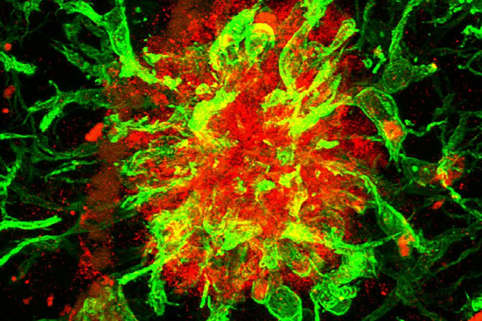 The work, led by Dr. Paola Bovolenta (director) and Pilar Esteve, of the Center for Molecular Biology Severo Ochoa and CIBERER, has been published in the journal Nature Neuroscience. The results of the study indicate that, in human samples of Alzheimer’s patients, the levels of SFRP1 protein are abnormally high and continue to increase with the progress of the disease. Experiments conducted in mice, in which the main pathogenic markers of the disease have been evaluated, show that when the function of this protein is inactivated, the progression of the disease is predicted.

The deposits in the brain of the β-amyloid protein are a key alteration in Alzheimer’s disease (MA). β-amyloid comes from a protein called the β-amyloid protein precursor (PPA) that has functional signaling properties under normal conditions and is metabolized in two ways: one of which is mediated by the action of γ- and β-secretases, and results in the appearance of β-amyloid; the other, for β-secretases and α-secretases (ADAM10), and produces a non-amyloidogenic peptide. In Alzheimer’s disease there is a reduction in the activity of the non-amyloidogenic pathway in favor of the amyloidogenic route, which leads to the deposition of β-amyloid on the senile plaques and the blood vessels.

In this work, the reason why the non-amyloidogenic pathway is reduced in Alzheimer’s has been studied. It has been identified that the production and levels of the only known endogenous inhibitor of ADAM10, the SFRP1 (secreted-Frizzled-Related-Protein 1) protein, are elevated in the brain and cerebrospinal fluid (LCR) with the progression of the disease, and in transgenic mice that imitate human disease. The increased expression of Sfrp1 occurs in early stages of the illness and the following work hypothesis was that this could be a reason for the imbalance between amyloidogenic and non-amyloidogenic Alzheimer’s. With this hypothesis, a treatment aimed at inhibiting SFRP1 began. Inactivation of SFRP1 with specific antibodies activated the non-amyloidogenic pathway, inhibited the production of the β-amyloid protein and reduced the deposits of senile plaques in the mice.

According to the director of the Institute of Neuropathology, Isidre Ferrer, “perhaps the most important in this study, from a therapeutic point of view, is that the treatment led to an improvement in the cognitive deficits, the electrophysiological functioning and the Nervous transmission in treated mice ». The participation of the researchers from the center (Ester Aso and Paula García-Esparcia, as well as Professor Ferrer), consisted in the study of human samples of the disease and in the discussion of the interpretation and conceptual analysis of the results.

The mechanism described indicates a new pathway for the treatment of Alzheimer’s disease, aimed at enhancing the non-amyloidogenic pathway of PPA degradation, reducing β-amyloid deposits, and improving cognitive function. “Additionally, the reduction of SFRP1 levels in the CSF can serve as biomarker of the disease in early stages,” says Professor Isidre Ferrer, a member of the Faculty of Medicine and Health Sciences and the Institute of Neuroscience of the UB (UBNeuro).